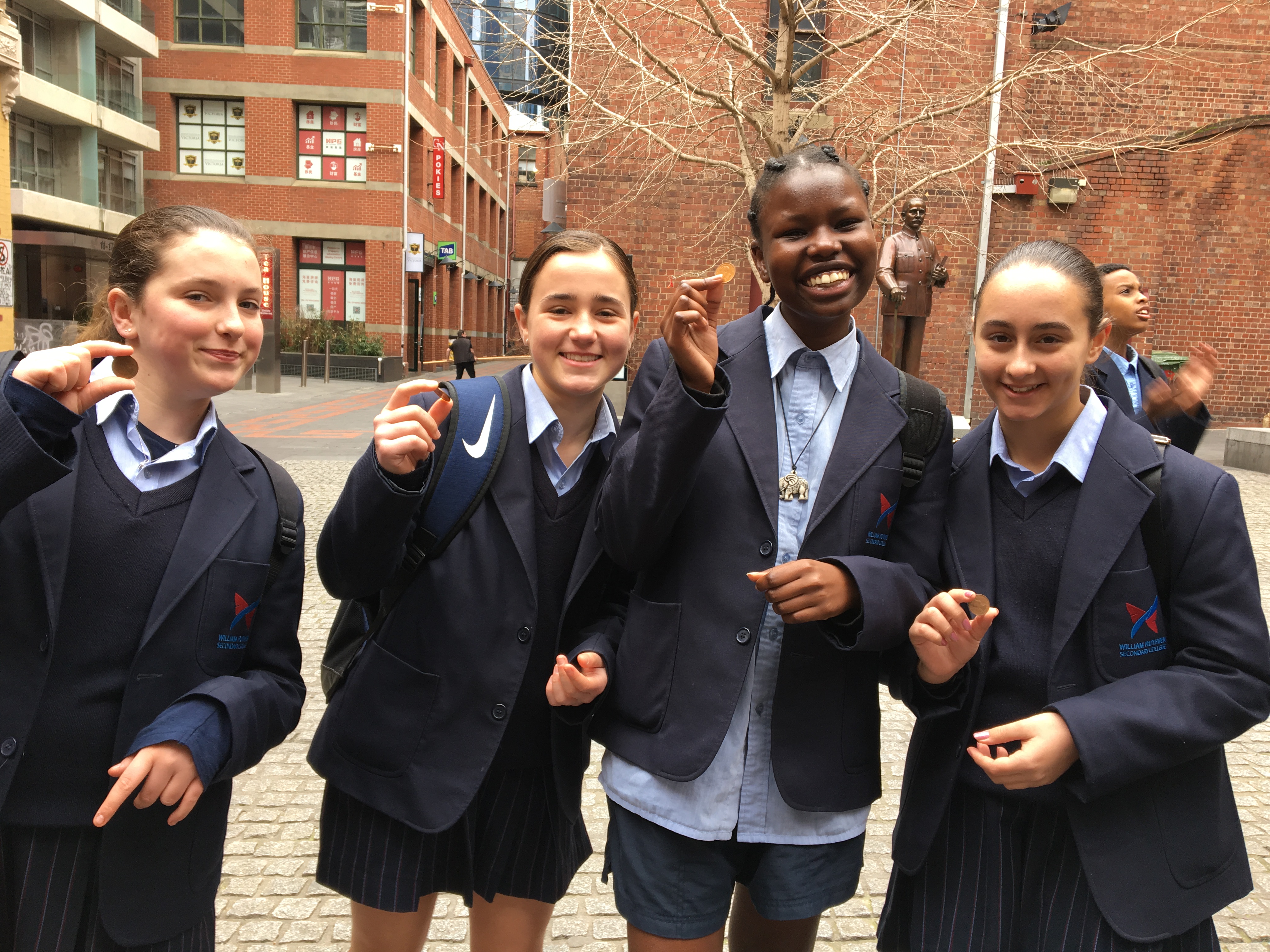 Last term in Year 8 English we were reading the novel Runner. Our teachers organised an excursion for us that took us to many of the places that were mentioned in the novel.

We started at the Victorian Parliament building, which let us look down Bourke St and across to the theatres towards Little Lonsdale Street.

We visited places which were featured in the novel to get a better understanding about what they would have looked like back in 1919. We saw the fancy side of the city and then went into the laneways that were full of crime and poverty.

We stood outside a lot of the very old buildings that were homes and businesses of the past. Some of the places still smelled very bad but at least today, those areas didn’t have sewerage running down the stone gutters or blood and guts from the butchers shops of days gone by.

It was good for the year level to go and experience the city life as well. We went to Bourke Street, which was featured in the story.

This was the street where Charlie Feehan, the main character in Runner, won the race and become Squizzy Taylor’s delivery boy. As we stood there, one of the old green and yellow trams rumbled by. This was almost the sort of tram that would have passed this place when Charlie ran up and down the streets.

The guide gave us all the identity cards of the characters in the novel and as we got to different places, each student had to read their part. This helped us to recreate the novel. We got to learn what the characters looked like and where they once lived. We saw old photos of the streets we were standing in, we couldn’t believe the difference that had taken place over the last 100 years.

Report: Iman, Bonnie and Yasmeen – 8A

On Wednesday, July 17 we went on an excursion called the Squizzy Taylor Melbourne Walking Tour. We started at Parliament House where we all received our own character from the novel Runner. We visited 10 stops in total including the Princess Theatre, Slum Hall in Little Bourke Street Romeo Street, Eastern Market, corner of Russell and Bourke streets where the Fitzroy vendetta occurred, the Orient Hotel, Chinatown, Melbourne Hospital and lastly to the Chinese Museum Square.

During this time, we learnt many interesting facts about Squizzy Taylor; he married three times, had three children and he stole $20,000 worth of jewellery. One of the characters we portrayed was Ida Muriel, also known as Jazz Baby, who married Squizzy Taylor in 1924.

Her nickname was Jazz Baby because of her obsession with jazz dancing at the Palais Theatre in St Kilda.  She was arrested on the run from shoplifting charges in July 1922 while window shopping in Flinders Street. After Squizzy Taylor was killed, she opened a dance school with dancing champion Micky Powell at today’s Tuscan bar at 79 Bourke Street.

Another character we re-enacted was Constance Stone who was the first female doctor in Australia from 1856 to 1947. She inspired her sister, cousin and daughter all to become doctors after her and together they dispensed free treatment to the poor in Latrobe Street in Melbourne.

They asked every woman at the time to donate one shilling and with the funds raised they helped build The Melbourne Women’s Hospital at 210 Lonsdale Street.

Report: Andrew and Theo – 8A

Our walking tour on July 17 was held to help us better understand the novel Runner by exploring key locations of events in the book. The walking tour started at Melbourne Parliament House where the students were split into two groups and they set off on the tour! We first visited a theatre where Squizzy Taylor, a real life criminal and notorious gang leader, would often take his girlfriends and wives.

The second location was a dark alley where we learned that this was where illegal trade would often occur. Next, we visited a street where the police one day locked everyone up for being a pimp, prostitute or criminal.

We then visited the location where there was an attempted assassination on the life of the gangster Squizzy Taylor who was shot twice in the leg. We then learned of the gang war that ensued between the Fitzroy Gang and Squizzy’s Gang.

We were also all given our own penny and we were shown how to play two-up. After this we returned to school with new knowledge and firsthand experience about the novel Runner and Melbourne’s history.

Report: Mikalee, Monique and Rosie – 8A

In English, the Year 8s have been studying the novel Runner. On July 17 we were lucky enough to go on an excursion to the city for a walking tour of the areas mentioned in the novel. On the tour there were 10 stops, and at each stop we were informed about what happened in that area at the time of the novel (early 1900s, Melbourne).

We participated as various characters and re-enacted key events in the novel. We also got to play a very popular game at the time called ‘two-up’.

We now have a better understanding of the novel and would like to thank Miss Leptos, and Vicky for coming and a special thanks to Miss Kourabas for organising the excursion.