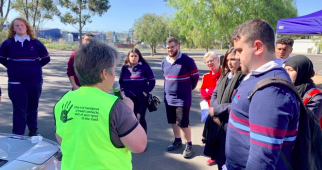 In another life skills activity strongly supported by this year’s VCAL class, the WRSC students attended the RYDA day of driving safety workshops in Broadmeadows.

The day began with the shocking statistic that every day, 100 Australians die on the road and one third of them are passengers. The day was designed to make our students and other road users safer. The key question for our students was “It’s my life and my choices, so what can I do to make me and my friends, safer?”

The session began with a frank and fearless session in which each student was asked to reflect on how well they know themselves, how much self-control they have, how secure they are about speaking up when they see something wrong and how aware they are of risks.

There followed an exploration of strategies to address areas of weakness. One of the most useful aspects of the session was how to use such things as humour or indirect comments, as speak-up strategies with friends when a young person finds themselves a passenger to an unsafe driver.

Throughout the various sessions, our students were encouraged to take responsibility by talking about collisions as “crashes”, rather than “accidents”.

The word accident suggests the event occurred as a result of factors beyond our control, but a crash is something which our choices and actions contribute to.

In a graphic display of the high personal cost of the road toll, the students were asked to give their opinion on what number of road deaths is acceptable. They were then asked to think about our total school population of 400 students, and then to think about what proportion of them would be an acceptable road toll statistic.

This powerfully underscored the fact that every life is valuable and that the only acceptable road toll is zero. In the car park, students saw a dramatic demonstration of the wildly different reaction times and stopping distances related to different speeds.

There was an audible gasp as the crash mannequin was flung into the air by even the lowest collision speed. Students were reminded that when most of them receive their licence over the next 12 months, and they excitedly take the wheel and their life in their hands, the little plastic card is an acknowledgement that they have passed a “minimum standard of competency” and not to drive with the confidence that they are gold standard motorists.

“Getting a licence is about being prepared to take on life and death responsibilities. The key is to drive SOS (i.e. drive So Others Survive).

The shocks kept coming in the afternoon sessions, presented by a young man whose job it is to attend major crashes. So far this year he has already attended a huge number of road fatalities. “The job of every driver is to do everything to avoid a crash at all costs”.

It was alarming to find out that you can be 100% right in terms of the law, but still potentially be charged by the police for not taking every possible action to avoid a collision.

The final session of the day saw the WRSC students meet a young man who as a 24 year old broke no laws but was still involved in a collision that left him with significant brain and body injury – 25 operations over 11 years and a public medical bill of over $2million have given him something approximating a normal existence, but his life was changed in the blink of an eye.

He urged us to only drive registered and insured cars because such accidents can leave uninsured victims and their whole families, financially devastated.

As our WRSC VCAL students plan their exit from school and their tentative steps into independent adult life, this amazing RYDA program, made possible through the generous support of Rotary, for-warns and for-arms them to face the challenges they will meet.