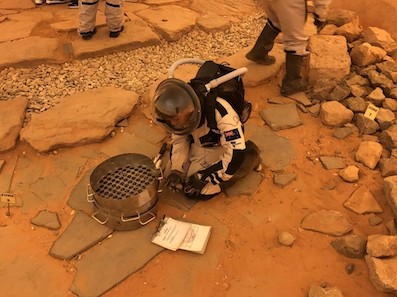 During the early days of May, all Year 8 classes participated in an expedition to the Victorian Space Science Education centre. This centre is used to educate students about various topics related to astronomy and general sciences.

This centre specialises in a mock-up version of the surface of the planet Mars. complete with various geological landmarks and hazards.

Each class went separately, and then each class was split into two groups, named Viking and Mariner, after early NASA missions to the red planet. One team would operate on the surface and the other would act as mission control.

The surface operation teams were suited up as astronauts and the mission control wore the space-themed jumpsuits that the VSSEC provided. While on the surface the team mapped the surface and collected test samples, as well as taking photos and marking points of interest or danger. Mission Control ensured safety.

About 30 minutes into the mission, a natural disaster was scheduled to occur … this could include a regular Martian dust storm or a CME, short for coronal mass ejection. CME’s are bursts of plasma and radiation that the sun emits at random and can have devastating effects on planets that lack a magnetic field or atmosphere, such as Mars.

The mission control officer was responsible for coordinating the team, and they would talk to a surface commander who would instruct the surface team.

Then once the ground team finished their mission, the teams would swap over allowing the mission control team onto the surface and then they would be instructed by new mission control

If your mission was a success, you would take your samples to a lab for analysis to see what their elemental composition is or how old they were, and even how they formed. Once the teams got their answers, the expedition would be complete and considered a success.

This expedition was a good way to witness teamwork amongst Year 8 classes, and to see how people would react while in tough conditions or under stress.

Overall, all Year 8 classes had a good time and learned something new about Mars and maybe themselves too.