Students up to the Y Challenge 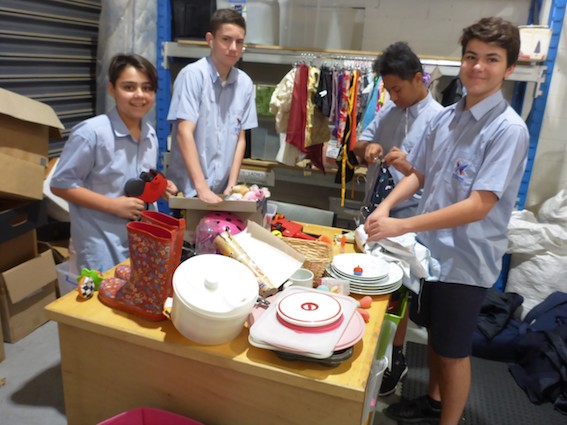 Charity Save the Children goes to some of the toughest places on earth to save children from earthquakes, cyclones, conflict and disease.

Where children are being exploited, neglected or abused, the workers from this charity put themselves in harm’s way to protect children from harm.

The funds for this work come from donations and the money raised by their charity shops.

When they first arrived, there was chaos at the shop, mainly due to the decluttering craze sparked by Netflix TV show Tidying Up with Marie Kondo.

“We could hardly move in the store room and the arrival of the students was very much appreciated,” explained Kerry and Nina, two of the shop’s four regular adult volunteers.

“The students were happy to get stuck in and do anything that was needed”.

The students helped out by shifting furniture, opening donation bags and sorting goods into piles of saleable items and others to be sent to landfill.

The students also quickly discovered that one of the shop’s never-ending tasks is cleaning. As it’s located on the busy corner of Mahoneys and Sydney roads, a lot of dust is stirred up by the traffic.

For Shaden, taking charge of the duster and vacuum cleaner was a new experience.

“I’d never dusted in my life,” he explained, but he was soon making the shop look spick and span.

Matthew was not fazed by the variety of task he was asked to do.

Work around the house had clearly prepared him for the shop work. He was one of the first of the WRSC team to recognise that charity shops are full of treasures.

So far he has purchased five Family Guy DVDs and as we’re chatting, he comes across a sixth.

Oliver and Lemi are surprised at how much they are both enjoying the volunteer work, but have some advice for students thinking of taking up the Y Challenge next semester.

“Don’t expect it to be easy and don’t choose this elective if you are lazy,” they say.

The boys are working hard and leave work with a great feeling, knowing their work is contributing to life saving and life changing projects around the world.