Working for the Soul 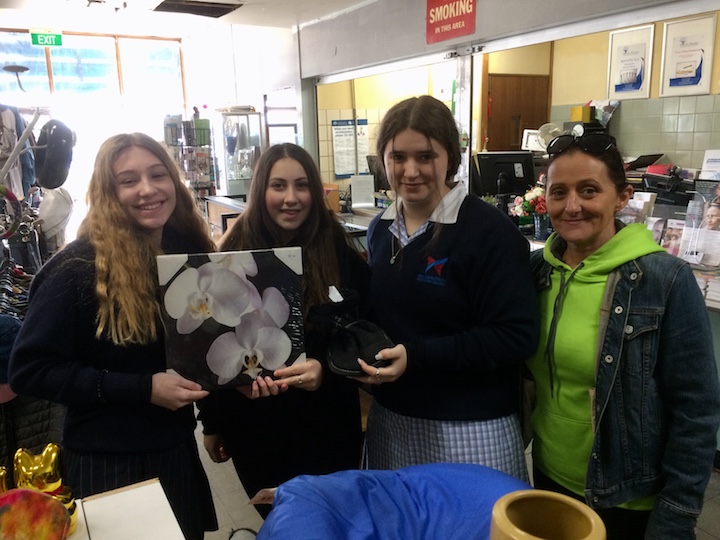 I wondered if my GPS was working correctly as I drove to the volunteer placement for Nakyta Perta, Dakota Nicolazzo and Eva Soto.

The charity shop I was heading to was tucked away behind Northland Shopping Centre in an industrial area. Anita Perta, a WRSC parent has volunteered there for some time and was delighted to help her daughter and her friends when they had difficulties finding a volunteer position.

“At the beginning we would ring up and people sounded positive, but really there was no position and they were just wasting our time. They just didn’t want to disappoint us and tell us that they wouldn’t take us on,” explains Nakyta.

Even at Soul, it wasn’t easy. The girls were interviewed by two staff and they had to prove they were serious about doing this work. Working for the Soul is a passion project of owner Marie, who identified a need not yet met by mainstream charities – so she set up her own. The shop thrives on donations from supporters who give quality clothing and household goods, some of which are near new. But clever Marie has also struck deals with local shops that are closing down and she receives the remnants of stock they can’t sell.

Nakyta steps up to be the spokesperson for this group of WRSC volunteers. She has realised that a wide cross-section of people shop at Soul. There are bargain hunters, but there are also a lot of people who are having a tough time and looking to stretch their dollar as far as it will go.

Nakyta is very enthusiastic about her work at Soul. “We learn better communication skills. We learn how to handle money. We also learn how to price and display goods. We photograph items, and post them on Facebook Marketplace,” she says. “It’s not easy work as sometimes the customers have disabilities and communicating is harder. We have worked hard to understand peoples’ needs and help them. I think it’s really important to be respectful and make people feel good about themselves.”

Asked if she prefers schoolwork or volunteer work, Nakyta is of two minds. She loves the school day because she is among friends but the volunteer work is something special.

“Here we are doing work that’s actually helping, and that’s a great feeling,” she says.