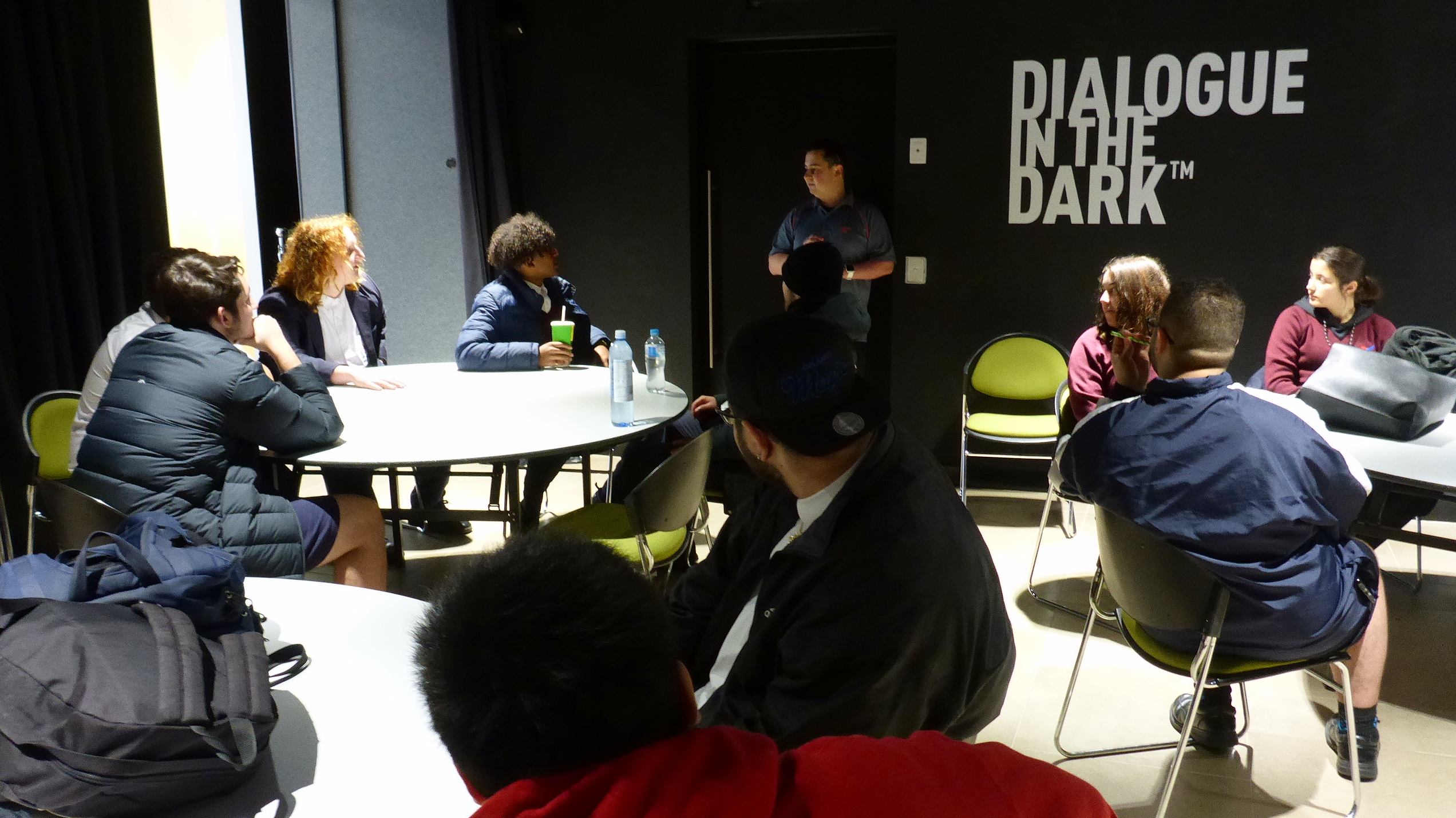 In studying the novel The Story of Tom Brennan, the VCAL literacy class has seen a life plunged into darkness when young man Daniel Brennan, driving drunk and reckless, kills two close friends and leaves his cousin a quadriplegic. It’s a grim story of the gloom that envelops not only Dan, who ends up in jail, but also his brother Tom and the rest of his family when their small town turns against them.

The life altering effects of dangerous risk-taking behaviour got us thinking and the Dialogue in the Dark workshop gave us the perfect opportunity to safely experience a life changing disability.

The workshop began by having us remove our watches, phones, fitbits and any other light-emitting technology. The sense of discomfort began almost immediately as we handed these over. In small groups and with a blind guide, we moved into a low-lit transition room where we were kitted out with our walking cane. It would become our best friend as we were plunged into darkness for the next 80 minutes.

A ripple of nervousness rang around the room, as, clutching the handrail, we moved into the simulated black world. Suddenly a soundscape filled the air and had to guess where we were. The wind was rustling through the trees. In the distance the traffic was whooshing along a road. A few birds swooped by. It was Yarra Park. We walked on, tapping our way through the park, feeling the ground change from grass to gravel. Tentatively we reached Birrarung Marr and faced the challenge of finding a water fountain, a park bench and a bird’s nest cupped in the bough of a tree.

There were so many “oops… sorry… who is that?” as we bumped into each other and the obstacles that loomed up at us. Quickly we became a team, calling out instructions to one another and using our voices to guide us around what seemed like a labyrinth of obstacles.

“Tyson and I didn’t know how to get out of the garden and we were stuck under a tree for quite a while”, Jason Liu admitted.

We crossed over to the MCG, hearing the roar of the crowd grow as we approached. The Avenue of Champions surrounding The G offered the next challenge as we had to use our fingertips to read the names beneath the statues.

None of us were ready for when we got to the William Barak footbridge, and the whole thing began swaying and listing as we crossed the Yarra River. Laura Vieira admitted she had a bit of “mental breakdown” at this point. “I felt really lost in the dark”, she says.

We felt and smelled our way through the stalls at the Queen Victoria Market. We guessed most of the fruits but the clothing and shoe stores were a little more challenging. Then it was a terrifying walk across the road to catch a tram to the Bourke Street Mall, and a new terror as we mixed it with the crowds, bikes, and other vehicles strewn about the place. It was such a relief to find a street bench and sit down in safety.

After our experience, Cat, a beautiful young woman who had lost her sight as a result of a degenerative disease, opened up a Q and A session. No questions, however personal, were off limits. For Mursal Atura, this was no common school excursion.

It was a “life lesson” and a powerful learning experience for the WRSC students.

We then visited The Police Museum, with its mangled wreckage from the Russell St bombing and the gun used to shoot the notorious crime boss, Squizzy Taylor. But even this wasn’t as memorable as the drama of the morning workshop.